In the week from 31 October to 4 November 2022, a team of the Norwegian partners under the NTEF project “Implementation of innovative climate change mitigation and adaptation measures in the municipalities in Bulgaria” funded by the EEA FM Environment Protection and Climate Change Program visited Bulgaria.

The delegation included Mr. Christian Larsen from the Norwegian Association of Local and Regional Authorities (KS) and Mr. Carlo Aall and Mr. Kyrre Groven from the Western Norway Research Institute (WNRI). They took part in the two events that took place this week and visited two of the sites planned for the project.

They took part in the two events, which were hekd during this week and visited two of the sites, envisioned for implementation of measures within the project framework.

On the day of the interim conference under the project, the guests met and spoke with the Minister of Environment and Water of the Republic of Bulgaria, Ms. Rositsa Karamfilova. The two parties expressed their satisfaction with the good cooperation. The Norwegian partners paid attention to their interest our cooperation in the coming years to focus also on the synchronization of the climate change adaptation activities with the activities for biodiversity conservation and social justice.

Mr. Carlo Aall delivered a presentation on Norway’s experience in the field of higher education related to the climate change adaptation, which provoked high interest, as well as many comments and questions on the part of the participants.

On the first day of the training, which was provided to over 70 representatives of more than 40 local authorities hroughout Bulgaria, the Norwegian team presented the role and functions of the Norwegian municipalities in the climate change adaptation activities, as well as the experience of several countries with concrete measures to adapt to climate change in urban environment.

The delegation from Norway also managed to visit two of the sites, which will be funded under the project – the amphitheater in Vazrazhdane Park in Sofia and the critical points on the road infrastructure along Maritza Blvd. under the bridges, which are floded in cases of heavy rainfall. They confirmed their opinion on the timely and appropriate measures, which are envisioned to be implemented for overcoming the heat island effect in Vazrazhdane Park in Sofia and the floods caused by heavy rains in Plovdiv.

The partners from both parties discussed the next steps of the project implementation and some ideas for the optimization of its results. 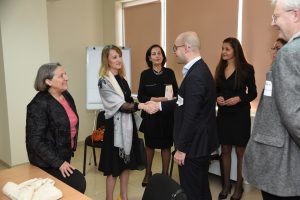 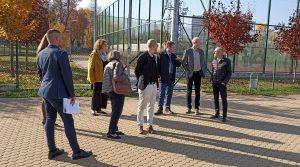 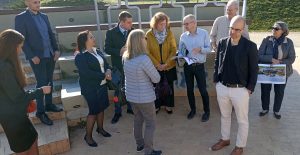